The newly released ACP127 Gateway for IRIS Organisational Messaging has greatly improved the tolerance for handling ACP127 messages with deviations from the standard. Moreover, it simplifies deployment and ensures support for the latest versions of Microsoft Exchange.

Exchanging ACP127 messages in a coalition network can cause great frustration as many messages do not follow the standard correctly. Often this is caused by human mistakes in manually created messages or by wrongly interpretations of the standard in the coalition partners’ systems. Previously such erroneous messages were rejected by IRIS Organisation Messaging, which left the COMMS staff as major bottle necks correcting messages before sending it into the distribution flow in IRIS Organisational Messaging. With the new ACP127 Gateway all that is required to allow the message into the distribution flow is that Originator and Body Text can be recognized. Deviations in other parts of the message will be clearly highlighted to the operational user when the message is opened in Outlook.

The installation and configuration of the new ACP127 Gateway now only require a few simple steps to get up running. Most of the configuration can actually be prepared in advance by a technical expert, which makes it possible for less trained personnel to do the actual installation.

The new ACP127 Gateway is available to all IRIS Organisational Messaging maintenance customers. Please contact product-support@systematic.com for information on how to get access to the software or for any questions in general to the ACP127 Gateway. 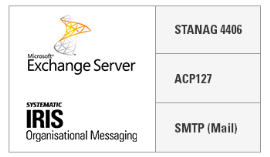 IRIS Organisational Messaging extends Microsoft® Outlook® and Exchange® with military messaging capabilities, which allows creating and viewing STANAG 4406 and ACP127 compliant messages. Furthermore, it gives military organisations the capability to interoperate on a role level rather than on individual user level.With more than 100,000 users in over 40 countries worldwide, the IRIS products are considered the defacto standard for handling formatted military messages. IRIS provides users with combat-proven messaging capabilities, which has been developed over more than 20 years.Check out the full suite of IRIS military messaging products
Related Content
AcceptWe use cookies to improve the usability of our website and to measure traffic. By visiting systematic.com, you accept our use of cookiesMore info