Under one roof – vehicle architecture and SitaWare

Modern armoured vehicles are becoming increasingly complex platforms, as an ever-growing number of sensors, effectors, communications systems, and more are being added. But how to make the most efficient use of them, and ensure they all work together?

Underpinning modern armoured vehicle design is a common principle, referred to as a generic vehicle architecture (GVA). The overarching aim of a GVA is to help deliver common standards, ease system integration, and reduce risks and costs, while also ensuring that future upgrades can be undertaken easily. This helps end-users avoid vendor lock-in, as well as migrating new and legacy subsystems to support cross-fleet interoperability.

Work on a formalised GVA standard began in the United Kingdom and has continued over the past 20-30 years to develop a baseline GVA standard, with NATO also developing a standard, NATO GVA (NGVA), and Australia also creating their own standard (AS-GVA). Early efforts at delivering this standard focused on the power and electrical systems within a vehicle, before evolving to include data systems and subsystem integration.

GVA now promotes the idea that data is to be in the centre, and systems and applications can be both consumers and providers of data. The design seeks to lay the foundation to avoid direct system-to-system, system-to-sensor integrations by describing a common approach based on data, use cases/workflows, and using the same technology for exchanging data.

“Under earlier vehicle design and subsystem integration practices, systems sometimes each required their own sensor for essentially the same data, which also meant duplicated integration into the overall vehicle architecture,” Christoph Pauls, Business Product Manager at Systematic, said. “Under the concept of GVA, this could be simplified. For example, a vehicle may have had multiple GPS receivers to provide the position to the radios, battle management system, inertial navigation system, remote controlled weapons stations, and so on. Under GVA principles only one GPS receiver system is needed, and its data is easily shared out to each subsystem through a common software data bus.”

This means that there is a reduction in cabling and external antennas, as well as reduced power consumption to support these common subsystems. This can support positive changes in other areas such as reductions in overall vehicle weight, added space availability for extra loads, increased protection, or improved ergonomics for passengers. Other benefits can include easier maintenance and a reduced number of components that can break and potentially undermine vehicle availability. 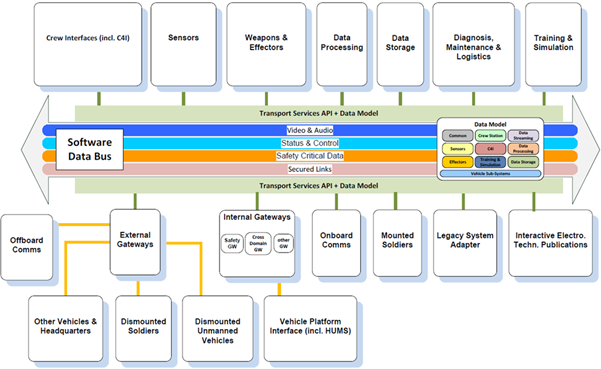 Data exchange is governed through the Land Data Model, allowing for specified information to be transferred over standardised interfaces such as ethernet cables. Enabling an open systems architecture allows for “interoperability by design,” which can mean both within the vehicle’s own subsystems, as well as in sharing data with other vehicles and units.

SitaWare Frontline, the battle management system (BMS) designed for mounted commanders, has been designed from the outset as a modular and extendable system to allow for easy integration with various radios, sensors, and vehicle and weapons stations. A public API and software development kit also allows original equipment manufacturers to smooth the integration journey, and supports customer choice in vehicle subsystems and equipment, while futureproofing SitaWare Frontline equipped vehicles.

SitaWare Tactical Communication acts as the core backbone underpinning the integration between the BMS, radio systems, and vehicle, weapon, and sensor interfaces. Integrations with external sensors and systems can be saved and reused on other GVA-compliant vehicles, thereby reducing the costs of redevelopment on vehicles developed to the same GVA standard.

The process of upgrading and updating the technology within a military vehicle is made even more complicated by the different timeframes for technology refreshes, Pauls said.

“We typically see the IT side of a vehicle platform or subsystem going through an innovation cycle every one to two years. For the electronics side - the networking infrastructure, power interfaces, plugs, and cabling, and so on – this goes through an innovation or replacement cycle every four to six years. The mechanical componentry, which brings in new mounts and cabling, as well as other interfaces or entirely new systems, could only be really changed every 10-20 years.” 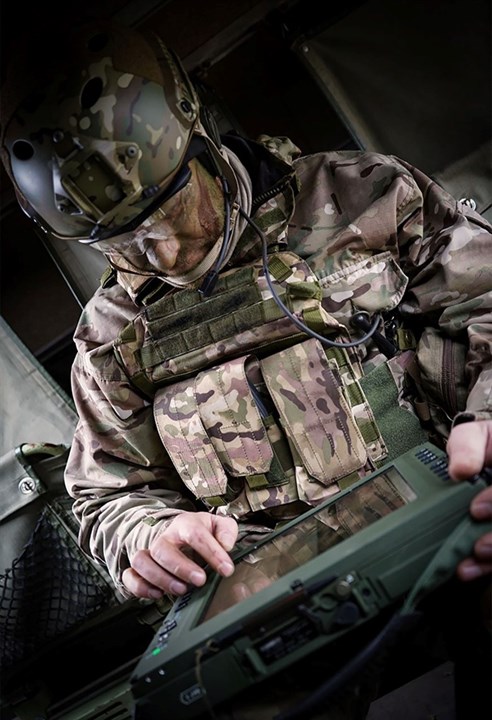 As a result, the IT systems within an armoured vehicle are usually added in at the end of the initial development cycle to ensure that all the planned subsystems can be integrated together. However, with the IT environment constantly evolving to account for a range of factors such as cybersecurity, changing interoperability requirements, and new subsystems and payloads, it is essential to keep updating it.

Working with an agile open architecture software system such as SitaWare Frontline that can be easily upgraded and patched as necessary is essential. If changes and upgrades to the software system deployed through a vehicle requires a corresponding significant hardware refurbishment, then costs can rapidly increase. More extensive and invasive works can reduce the availability of vehicles, and potentially require further re-integration work of existing subsystems.  The ability to migrate an IT system to a broader fleet is also a key part in ensuring that a national operating capability can be maintained, and supporting interoperability across vehicles undertaking different roles in support of operations.

Current methods employed for fleet software upgrades help to ensure that vehicles equipped with SitaWare Frontline can operate the latest technology quickly, and that user profiles can be easily transferred from one SitaWare Frontline-equipped vehicle to another. New technology is being developed by Systematic to further improve the ease of system upgrades and support, allowing for rapid deployment of new software, drivers, and firmware.

SitaWare Frontline as an ISR tool

As the variety of sensor and effector systems are integrated, the ability for the vehicle commander to improve their situational awareness through a single screen is dramatically increased.

Sensor data gathered by a vehicle can be rapidly disseminated automatically to SitaWare Insight, feeding into a data lake and being assessed as part of a regular intelligence cycle by analysts. Vehicle commanders operating SitaWare Frontline are then able to take advantage of the resulting analysis to change mission plans dynamically or reorient rapidly to address new threats. As a result, a SitaWare Frontline equipped armoured vehicle can be a powerful asset to any mission, being able to rapidly improve and support situational awareness

The modular and open architecture of SitaWare Frontline and SitaWare Tactical Communication, both being compatible with the approaches set out by GVA, can support a faster and easier integration of ISR sensors, thereby aiding this workflow from the beginning already. The creation of standards and open architectures under GVA also enables governments to make smarter investments, reducing costly integration work and helping to de-risk subsystem integration.

The seamless integration across the SitaWare suite of products – including the SitaWare Edge product for dismounted forces – allows for enhanced battle management, situational awareness, and intelligence sharing across the combat environment. This vertical integration also allows for greatly reduced risk in acquisition and installation management, with the SitaWare suite also enjoying a high degree of hardware agnosticism and reducing the need for multiple user interfaces.

The Systematic Software Development Kits allow both governments and equipment manufacturers to undertake this work to allow for seamless installation, meaning that the work can be done more openly than other BMS providers may allow.

For more information on GVA and SitaWare, contact our team for our Generic Vehicle Architectures and SitaWare Frontline whitepaper at: https://systematic.com/en-gb/industries/defence/contact/

AcceptWe use cookies to improve the usability of our website and to measure traffic. By visiting systematic.com, you accept our use of cookiesMore info