Systematic recently made a crucial contribution to the Pennsylvania National Guard’s (PANG) effort to enhance its operational readiness. Systematic enabled full command and control interoperability between the state’s Joint Forces Headquarters for Pennsylvania (JFHQ-PA) and operational units in the field.

The exercise enabled PANG to experience the features and benefits of the SitaWare Suite, which already provides the common software platform for the U.S. Army’s Command Post Computing Environment (CPCE) program of record. Systematic’s SitaWare suite provides all essential Command & Control and Battle Management capabilities right out of the box with modules customized for Command Post, Mounted, and Dismounted users. SitaWare’s browser-based interface is intuitive and quickly deployed, providing a feature-rich and scalable platform to support domestic operations—including interoperability among echelons and across agencies.

The PA exercise began with a single day of live classroom instruction by Systematic’s expert trainers. Initial classroom instruction was followed by hands-on applications training, demonstrating that users can be brought up to speed on the platform in as little as four hours. As an out-of-the-box solution, SitaWare is designed for rapid deployment and integration into existing military frameworks, providing an advantage over complex bespoke platforms which require extensive training and ongoing deployed support after fielding.

Following training, the Non-Commissioned Officer In Charge (NCOIC) utilized SitaWare’s tools to create a realistic weather event consisting of a simulated weather layer, an official journal entry, an execution matrix, and baselines for the various metrics, pictures, and layer constructs that needed to be tracked. A full set of bookmarks were created for the areas of the state impacted by the storm, enabling users to anticipate every element necessary in preparing their responses.

Finally, the simulated environment was presented to the various operators taking part in the TTX, enabling each to customize their own COP based on their operational role. This planning step ensured that leadership teams would have complete situational awareness of their AOR in near real-time—enabling informed decision-making regarding deployments, operational maneuvers, and resource allocation.

The TTX simulation called for the PANG to conduct a live test of the system under a simulated winter storm emergency covering the entire state of Pennsylvania. The force structure included the five individual Pennsylvania Task Forces (PTFs) and JFHQ-PA, where command and control was conducted via the SitaWare COP and displayed on a single screen at the Joint Operations Center (JOC). 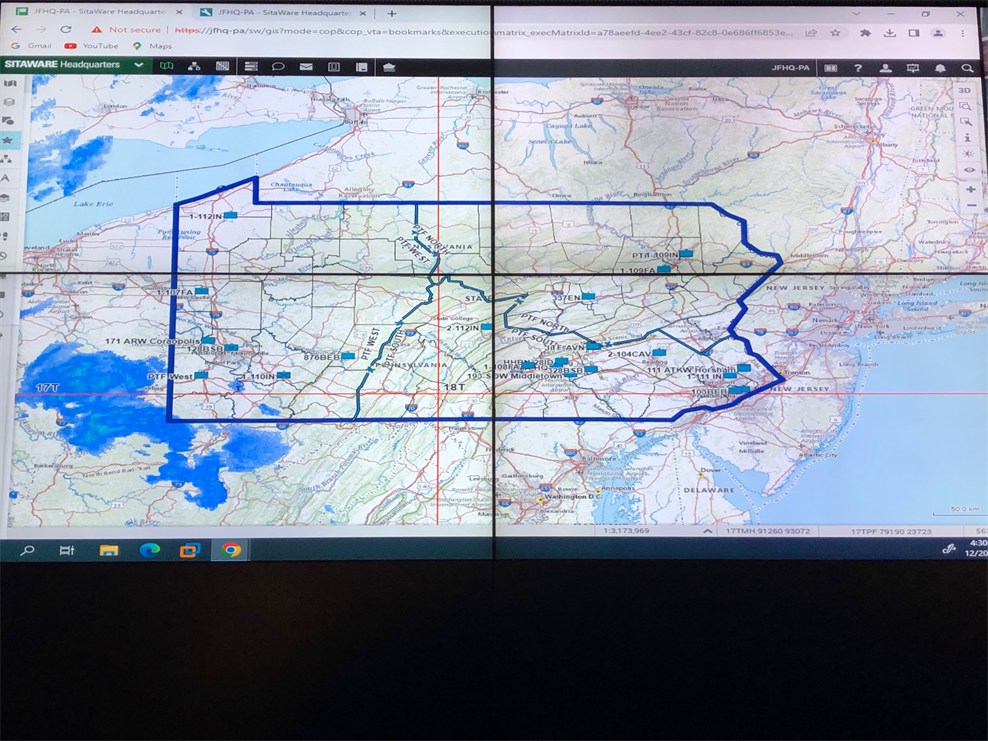 As the exercise unfolded, TTX operators received simulated State Active Duty (SAD) missions from the Pennsylvania Emergency Management Agency (PEMA), which were assigned to the appropriate PTF and added to the corresponding SitaWare layer. Operators also added journal entries for these missions, which were integrated into the overall execution matrix, providing commanders with up-to-date situational awareness.

Because these types of emergencies are dynamic and unpredictable, incoming information must be ingested quickly and easily incorporated into the multiple layers, journals, and execution matrix already constructed in SitaWare during planning. At the same time, operators leverage the holdings feature in SitaWare to reflect the status of resources available to each mission. SitaWare automatically updates this information from the subordinate command, providing JFHQ-PA operators with the necessary real-time information to make timely and accurate decisions.

The test exercise confirmed SitaWare’s capabilities and performance. JFHQ-PA commanders were pleased and confirmed that all objectives of the TTX had been met. Systematic stands ready to support the Pennsylvania National Guard and all other state units across the country to ensure superior C2 capabilities with full situational awareness and readiness for all domestic operations.

For information on how Systematic can ensure the most complete C2 at the tactical edge please click here.

AcceptWe use cookies to improve the usability of our website and to measure traffic. By visiting systematic.com, you accept our use of cookiesMore info