Know where your friends are! 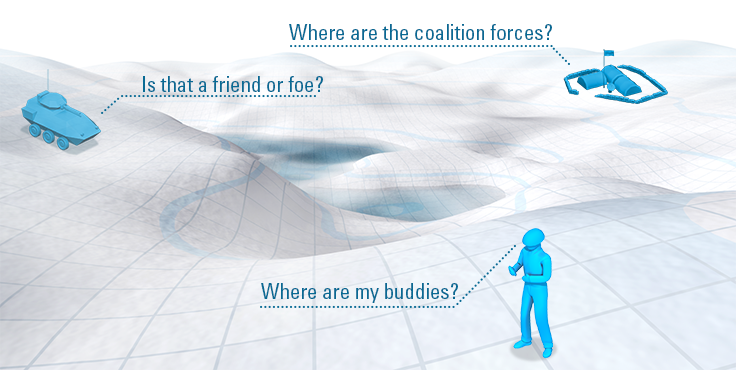 Friendly Force Tracking (also known as Blue Force Tracking) is commonly regarded as one of the most important capabilities of a Command and Control Information System (C2IS).

An effective friendly force tracking system provides commanders at all levels with the exact location of own forces and any coalition forces in their areas of operations. This knowledge is the key factor in force protection by significantly reducing the risk of friendly fire (fratricide). At the same time, the improved situational awareness allows commanders to make use of the full operational capabilities of their forces. This is why Friendly Force Tracking is integrated into all SitaWare products and provides effective friendly force tracking of both mounted and dismounted units at near real-time refresh rates.

Friendly Force Tracking From HQ to the Tactical Edge

SitaWare offers easy-to-deploy and cost effective solutions for friendly force tracking with its off-the-shelf suite of products that provide all the necessary software infrastructure and user applications to enable a friendly force tracking system that is simple, effective and effortless to use - all way from the commanders at the tactical edge to the upper echelons of command.

Learn more about friendly force tracking of mounted and dismounted units with SitaWare.

Inspired by those who serve

SitaWare is developed in close corporation with military forces, who have served in operational theatres such as Iraq and Afghanistan and addresses the real world challenges of deployment. The advanced SitaWare tactical communication protocol makes data communication over tactical radios extremely simple and effective for the operational user providing a highly effective exchange of friendly force tracks even over older tactical radios with very limited bandwidth. The SitaWare products are characterized by extremely simple and intuitive user interfaces and therefore users only require absolute minimum of training prior to deployment.

Friendly Force Tracking using the devices you already have

SitaWare runs on almost any communication device with a data capability: tactical radios, trunked networks, SatCom, mobile phones and WiFi. Simply use SitaWare on the devices you already have during deployment to get no-hassle friendly force tracking. It’s that easy. Learn more here.