Exchanging information with your coalition partners 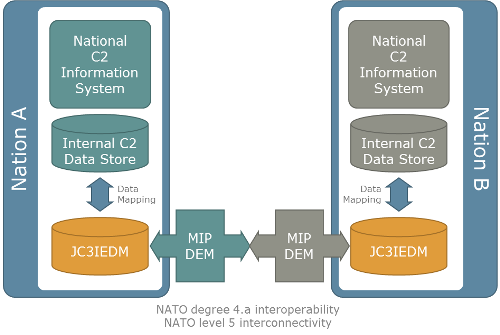 The Multilateral Interoperability Programme (MIP) is a Community of Interest that develops technical specifications, also known as the “MIP Solution”, for multinational interoperability between Command & Control Information Systems (C2IS), primarily for Land usage.

The core of the MIP Solution is the Information Exchange Data Model (IEDM) which is a relational model of almost every attribute and entity relevant for Land warfare in a Joint environment. This IEDM has been ratified under NATO STANAG 5525.

MIP data exchange between national C2IS uses the MIP DEM mechanism. This ensures that respective C2IS can be kept synchronised to provide a shared Common Operational Picture (COP) of the exchanged data. As the COP is updated or amended, MIP DEM replicates only the changed data, hence maintaining consistency of the COP whilst reducing bandwidth consumption.

A MIP baseline consists of numerous sets of documents. The core set is the IEDM but also initial operational requirements, implementation guidelines and test suites are included. For the test suites these are covering two main areas; the technical area and the operational area. The MIP System Level Test (MSLT) suites aim at the technical levels. The MSLT can be used for validating the technical specifications before baseline and subsequent release. At this stage the MIP member nations provide their C2ISs for testing the specifications. After release of a baseline the MSLT can be used for validating the MIP compliancy of a given C2IS. In order to avoid a ‘big bang test’ where the relationships between possible issues and their causes are unclear, the MSLT is split into three levels:

When MIP started the development of Baseline 1, MIP was being merged with the Army Tactical Command & Control System (ATCCIS) interoperability programme that had been ongoing since 1980. MIP adopted the ATCCIS data model and renamed to Land Command & Control IEDM (LC2IEDM). Also the ATCCIS Replication Mechanism (ARM) was used as the starting-point of MIP’s DEM. MIP Baseline 1 also specifies the Message Exchange Mechanism (MEM) as a supplement to the DEM. The intention of having two exchange mechanisms was that the DEM would be used for passing near-real time situation awareness information whereas the MEM would be used for distributing less time critical information as formatted messages, conforming to ADatP-3. Baseline 1 is obsolete and no longer in use.

In Baseline 2 LC2IEDM was evolved and renamed to C2IEDM. Although the ‘L’ has been removed, C2IEDM also focuses on Land operations. Whereas Baseline 1 mainly deals with information exchange, Baseline 2 also includes information grouping and presentation. Grouping is performed in terms of Operational Information Group (OIG). In the OIG concept information, when exchanged, is categorised into one of six predefined OIG types which are:

In Baseline 2 each OIG can only define one graphical overlay. This means that a given plan can only be expressed by one (single) graphical overlay. Presentation is specified by rules of mapping between the C2IEDM and the NATO symbology standard APP-6A and its US equivalent MIL-STD-2525B. Baseline 2 uses DEM as the only exchange mechanism for C2IEDM. Messages exchanged by MEM are no longer being mapped to the IEDM and thus are only being regarded as pure point to point messages. Although declared obsolete by MIP, NATO and a few nations still use Baseline 2.

The core of Baseline 3.0 is the Joint Consultation, Command & Control IEDM (JC3IEDM). Although still being Land focused, the JC3IEDM incorporates a significant amount of Air and Maritime elements and thus enables it to be used in Combined Joint operations. In contrast to Baseline 2, Baseline 3.0 allows each OIG to contain multiple overlays. Through an extensive support of plans & orders in accordance with STANAG 2014, Baseline 3.0 enables the exchange of complex plans and orders within a multinational coalition. Because of the vast improvement on plans & orders, Baseline 2’s COMPLN OIG has been changed to Plan & Order OIG (PLNORD), but still where one PLNORG OIG contains one plan or order. DEM is the only exchange technology to be used in Baseline 3.0, as MEM has been abandoned. Although MIP has declared Baseline 3.0 obsolete, it may still be in use by some nations until they have upgraded their C2ISs to support Baseline 3.1.

Although the core of Baseline 3.1 is still the JC3IEDM, the JC3IEDM has undergone significant restructurings and enhancements and thus should be regarded as a new IEDM. For symbology standards, mapping rules between JC3IEDM and MIL-STD-2525C have also been specified. The new operational requirements behind Baseline 3.1 are mainly based on experiences from recent operations, mainly in Afghanistan and Iraq. For this reason Baseline 3.1 provides an extensive support for information exchange about Improvised Explosive Devices (IEDs) and irregular actors. Based on the experiences from the lengthy missions in Afghanistan and Iraq where a significant amount of MIP information was accumulated over years of operations, the DEM has also been improved to handle this. Recognising that IEDM information may need to be exchanged with systems not using DEM (e.g. local authorities or NGOs), the DEM has been supplemented by the Alternate Development and Exchange Method (ADEM). ADEM specifies the use of web services. Currently the ADEM project team also investigates potential solutions to the challenge in exchanging IEDM information over low bandwidth tactical radios. Baseline 3.1 is the current.

MIP Baseline 4 is a radical change to the previous MIP baselines. In MIP Baseline 4 the JC3IEDM from Baseline 3.1 has been transformed into the MIM (MIP Information Model) which is modelled in UML (Unified Modelling Language) and OCL (Object Constraint Language).

Information, structured in the MIM, will be exchanged by an adapted version of ADEM.