The use of NFFI as an interoperability standard was initiated in 2005 by Allied Command Transformation (ACT) in response to an urgent need to exchange friendly force tracks between national Command and Control Information Systems (C2IS) within the ISAF coalition. The NFFI standard has been developed by the NATO Consultation, Command and Control Agency (NC3A), which in July 2012 was merged with SHAPE Technical Centre (STC) into the NATO Communications and Information Agency (NCI Agency).

The NFFI standard consists of a message definition and interface protocol definitions for the information exchange. As the name implies the standard is currently used only for exchanging information on friendly forces, but it could be extended to include information on other types of units. The NFFI specification is published in draft STANAG 5527, and although it has not been ratified by the NATO member nations, it became a defacto standard during the ISAF mission.

Compared to MIP, NFFI is a loosely coupled protocol for the exchange of friendly forces situational awareness data in order to reduce the risk of friendly fire incidents. More advanced information such as tactical planning, intelligence, and IED reporting are not a part of NFFI (but are part of MIP). NFFI is generally not considered an alternative to MIP but rather a supplement that will permit the exchange of a minimal set of situational awareness data with non-MIP systems.

NFFI is compatible with the MIP C2IEDM and JC3IEDM with a defined mapping between the two standards that result in a minimal loss of data semantics. Mappings also exist for converting NFFI to an APP-11 message text format or to a Link 16 message.

The early baselines of NFFI have not been widely used. Each baseline evolved the NFFI message schema making it more concise and robust. Systematic is not aware of any systems still using these baselines.

The NFFI message format is defined by an XML schema that contains both mandatory and optional sections. The mandatory section is the position and dynamics information, which will typically have a lower security classification. Optional sections allow for identification and status information, but adding these would normally raise the security classification of the message to a higher level.

Although not the current baseline, it is the most commonly adopted baseline in C2 Information Systems.

Baseline 1.3.1 included a new protocol called Service Interoperability Profile 3 (SIP3) v1.2. This is a web-services protocol providing a publish/subscribe exchange mechanism for exchanging NFFI messages. The SIP3 protocol also added the ability to specify a filter as part of a subscription in order to limit the result set to tracks of interest. This is the current baseline. An increasing number of C2 Information Systems are supporting the SIP3 protocol. 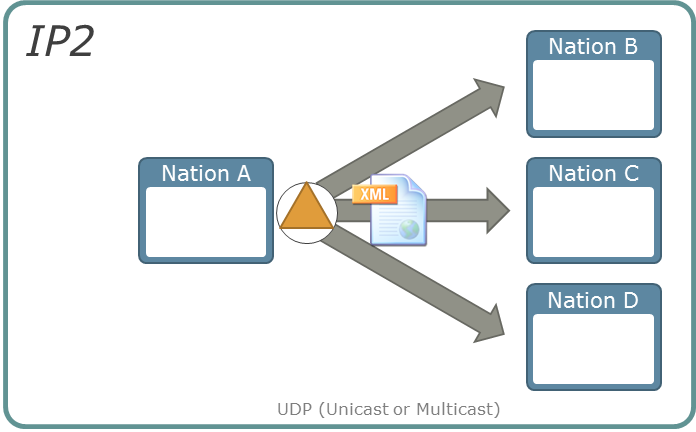 Version 1.4.1 removes one of the optional information elements moving some of its attributes to another information element, but otherwise it is essentially identical to baseline 1.3.1.
This version is not commonly adopted by C2 Information Systems.
No further evolution is expected on NFFI messages as they are to be replaced by the FFI MTF as described below.

Several NATO nations have stressed the need for harmonisation between NFFI and MIP.
As a first step in this direction the NFFI message definition has been replaced by a new APP-11 message text format (MTF) called Friendly Force Information (FFI) published as part of APP-11(D)(1) released in November 2015 and effective on 1 March 2016. The use of the FFI message will be specified in ADatP-36(A)(1).

The FFI MTF contains essentially the same information as the NFFI message, but also expands some information elements and adds some new optional information elements. The IP1, IP2 and SIP3 protocols are also used for exchanging the FFT MTF. This baseline is in the process of being adopted by C4I Information Systems and subject to multilateral interoperability tests such as the CWIX event.

NATO has also defined a friendly force tracking hub (FFT-HUB) specification for a component or service that is able to manage the distribution of NFFI messages between a set of Friendly Force Tracking Systems (FTS’) and C2IS’ using a hub and spoke topology. A FFT-HUB disseminates NFFI tracks to all connected nodes based on individual subscriptions. A filter can be applied to each node subscription so that only tracks that fulfil a specified set of criteria are disseminated to a node. A FFT-HUB also prevents loop back so that a node’s own tracks are accidentally echoed back.

Latest News
AcceptWe use cookies to improve the usability of our website and to measure traffic. By visiting systematic.com, you accept our use of cookiesMore info