Streamlined simplicity is the hallmark of any good tool designed for users on the move – and that’s what SitaWare Edge is all about. It provides the dismounted commander with extremely simple to use yet very powerful capabilities for locating friends, exchanging information about possible hostile activity, and the ability to quickly create command layers to illustrate complex maneuvres and share these with subordinates via tactical data communication. This saves valuable voice time and speeds up operation execution.

All tactical information in SitaWare Edge is displayed on top of a user selected base map, for example a military topographical map or a satellite image. SitaWare Edge can contain any number of base maps (only restricted by device storage capacity) allowing the user to select the base map most appropriate for mission phase.

The map can center on the user’s current location represented by a green dot on the map (center-to mode). If the device has a magnetometer sensor the map orients itself in the direction the user faces (compass mode). 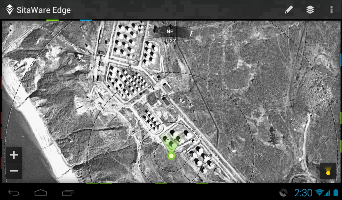 Friendly Force Tracking in SitaWare Edge shows the location and identification of other SitaWare Edge and/or SitaWare Frontline users as well as the position of coalition partners received through coalition interoperability such as NFFI or FFI via SitaWare Headquarters.

The friendly force tracks are available automatically to all members of the radio network across subnets and the wide distribution is performed by SitaWare Tactical Communication. 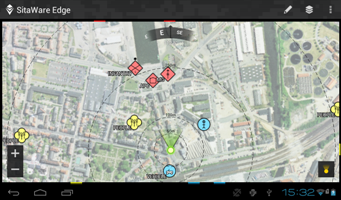 The shared tactical situation picture shows all spot reports based on observations in the terrain thus displaying a situational view of the battlefield at any given moment.

The tactical situational picture changes over time as it is based on information shared via radio with other units connected to the tactical network using SitaWare Edge, SitaWare Frontline or SitaWare Headquarters.

Each of the objects in the situation picture holds additional details that are available in either a callout (summary) or in a dialogue (full details). 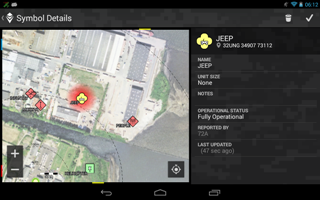 Observations can be reported and shared between own units and headquarters. All reports are automatically shared as part of the tactical situational picture and thus being visible to other units within the tactical radio network across subnets. After having distributed reports any commander keeping the reported object under observation can move/update location and information of a reported object. 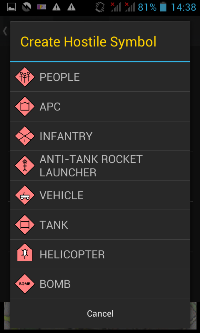 SitaWare Edge can display selected plan and intelligence overlays created in SitaWare Headquarters or in SitaWare Frontline allowing dismounted commanders to bring this information into the field. The plans and overlays can either be copied to the device prior to the mission or be received via the tactical communication network during the mission.

The user can individually enable and disable the display of plans and overlays ensuring that the situation display contains only the information of relevance for the current phase of the mission.

The Command Layer capability allows commanders to issue adjustments to their original order, or issue ad-hoc maneuvre orders to respond to an immediate situation.

Command Layers can be prepared using multiple colors and line- styles. A sketch made in the Command Layer is geo-referenced to the map on which they are drawn.

After composing a Command Layer, the commander can choose recipients by entering the appropriate call signs of subordinates or superiors. Call signs are saved, so when the commander sends subsequent sketches, the call signs do not need to be entered again. Command layers can be exchanged between SitaWare Edge, SitaWare Frontline and SitaWare Headquarters. 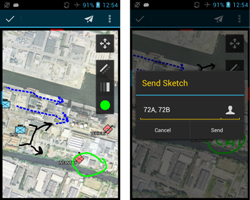